Those future damages, whether they be medical, vocational, or special needs, generally must be described by an expert, such as a physician, vocational rehabilitationist, or life care specialist.

Both concepts, future damages and the present value thereof, are joined closely and both are addressed here.

As mentioned, in order to accurately assess economic future losses, a formal evaluation must be completed by medical, vocational, or other experts.  Based on these evaluations, experience shows that certain assumptions can be readily made:

In essence, experts generally acknowledge that permanent injuries often have damage consequences that extend into the future, as well as the past.

Further, experience reveals that, given reliable foundational data (usually from U.S. Government sources), experts can calculate future damages with a degree of reasonable certainty sufficient to justify admission of the calculations into evidence at trial.

Life Expectancy – Missouri Courts will take judicial notice of the mortality tables presented in Volume 42 of Vernon’s Annotated Missouri Statutes. The statistical data from which those tables are draw is somewhat dated (1930-1940 for the most part) and, given that life expectancy has increased significantly in the last 80 years, many experts use other up-to-date resources.  For example, the US Department of Labor, Bureau of Labor Statistics, Statistical Abstracts of the United States publishes a table entitled Expectation of Life and Expected Deaths By Race, Sex and Age which is commonly used by experts to express a Plaintiff’s life expectancy.

Growth Rates – With the passage of time, the cost of any given item will increase, with very few exceptions. Growth rates vary based on the commodity under consideration, with wages growing at a different rate than medical commodities or the general price of consumer goods.  Those considered here are:

Wage & Earnings – Future loss of earnings is often a significant component to the Plaintiff’s damage considerations. Experts must consider:

Future Expenses – Experts must apply growth projections to estimates of future expenses that are reasonably certain to occur:

a. Medical Goods and Services – Need for regular treatments (i.e. on-going physical therapy) or regular medication costs (i.e. analgesics, etc) in the future, based on the current costs.  Also, future requirements can be estimated (i.e. a future total knee replacement) based on current costs after the applicable growth rate mentioned above is applied.

b. Household Services – As mentioned, the contributions of each family member to a household are of value and may be compensated when lost. These can include outright loss of those services, or turn on future requirements to hire third parties to perform tasks (i.e. lawn maintenance, preventative vehicle maintenance, etc), and future estimates will be based on current costs.  A number of studies have been done to estimate the average contribution to household services by household members, including:

and include current value estimates for each type of contribution.   Future requirements can be estimated based on current costs after the applicable growth rate mentioned above is applied.

c. Special Needs – Some injuries result in special needs.  When such is the case, commonly a Life Care Plan specialist will prepare a list of on-going special needs and the current costs.  Examples include physical or speech therapy, home environment modifications, technology aids, transportation modification, physical aids, etc.  Each case is different, and not all Plaintiffs will require special needs.  Future requirements can be estimated based on current costs after the applicable growth rate mentioned above is applied.

Based on this data, medical, vocational, and economic experts can estimate the cost of future economic losses with sufficient certainty that the projections will be admitted into evidence for a decision by the jury.

To understand present value, the first consideration is that the future damages will grow with inflation (Growth Rate).  The growth rates for various damage categories are presented in the foregoing section.

To determine Present Value a second consideration to be factored in  — the Discount Rate.

In essence, Present value is the amount which, if prudently and safely invested today, would likely yield future returns that will equal the future damages in the years when those damages will be incurred.  For that reason, the raw cost of grown future damages must be discounted by the investment potential if those damages were paid today, invested, and then used in the future.

Data is published in the Economic Report of the President, Table B-69, showing different investments including corporate bonds, municipal bonds, and long-term government securities.  The most secure are long-term government bonds (those that do not mature for at least 10 years), which in 1952 – 2017 showed an average investment return of 5.85%.

To give an example, consider a 49 year old worker in a relatively sedentary job who planned to work to age 67 (full Social Security age currently used for this example), but who suffers an injury that is projected to cause the worker to lose five years of work life expectancy and force the worker out of the work force at age 62.  The worker’s current salary of $30,000 per year will grow in the future at the growth rate of 4.20% (used for this example), and the worker receives 31.5% (used for this example) additional fringe benefits.  The worker’s earning capability can be projected into the future, with the actual losses from age 62-67 being projected by growth, and then reduced to present value by the discount rate of 5.85%.  The present value calculation for this example would look (more or less) like the following: 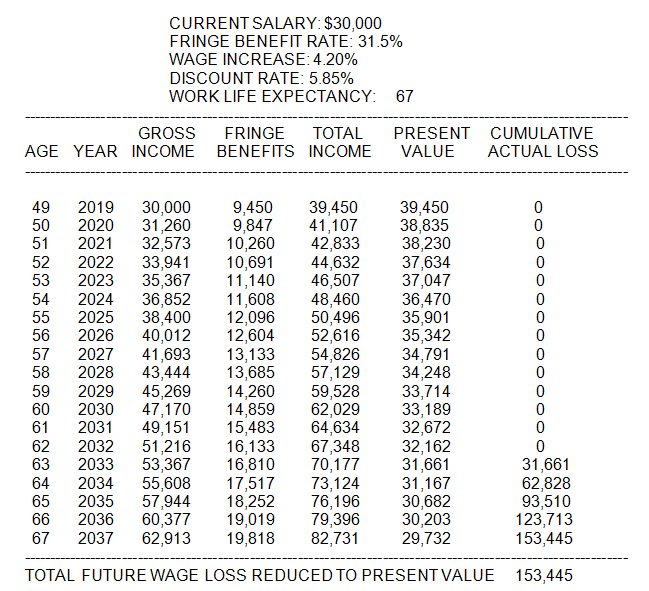 As this matrix reveals, in a medical neglect case, if the jury finds the Plaintiff will lose five years of work life expectancy, the jury would express the present value of the last five years of the workers earning capacity as $153,445 — even though the wage & fringe benefit loss in 2033-2037 will actually total $381,624.  If $153,445 is prudently invested today, beginning in the year 2033, the investment will grow so that it can pay the actual losses of $381,624 in the years 2033-2037 when the damages actually are actually incurred.

DID YOU KNOW ? is presented by Williams, Robinson, Rigler & Buschjost, PC as a public information service only.  None of the information contained herein is intended to be taken as legal advice.  Each matter depends on unique facts which attorneys must consider in forming an opinion, and may depend on laws unique to a particular jurisdiction.  No two cases are the same.  If you want to know more about this subject, contact Williams, Robinson, Rigler & Buschjost, PC, or the attorney of your choice, and seek a formal opinion about your particular case.

To get directions to this location, click "Directions" or "View larger map" on the map below (Google Maps will open in a new window).